Cooking should be Fun..

I am just another fans of Rachel Allen from different continent and loving her show and also recipes.

Yesterday,i was in cooking mode, so i browsed her book, cake , tried to find any recipes where apples are involved. There are several options there but what caught my eyes were d recipe of pear crumble cake. I don't really like fruits but apple should be just fine. So then i thought of changing d recipe with apple. then again the recipe mentions about hazelnut. oh gross. i don't have any hazelnut and assumed perhaps i still have walnuts in d drawer. later when i finished measuring the ingredients, i found out, the walnut was not there. this hazelnut is supposed to be used as the crumble. then i checked all over the drawer and found my apricot&oat muesli which i thought can be used as replacement.

For me, cooking should be fun. once we understand the techniques, we don't have to really stick with what is written in the recipes. mostly, i reduce the sugar quantities since no one in the house like those too sweet cakes. sometimes i even use my mom diabetic sugar, or her liquidized sugar and sometimes i change it with muscovado sugar. one thing about muscovado, it makes the cakes more moist than the caster sugar. i learn the using of this kind of sugar from most of nigella lawson's recipes.

other, when baking from a new recipe, i always make it as little as possible. like yesterday, i only made a quarter of d recipe. this way, i will not throw any left overs if only the cake fails. Good that i have many different size of pans.

this recipe is also complicated since it involves making the basic sponge cake, the apple filling and crumble. but it is worth it. the smell of the cinnamon when i cooked the filling, the smell from the oven and finally when i took it from the oven. divine!

taste is awesome. i can not stop eating the crumble. my version of crumble which consisted of butter, muscovado sugar, fluor and muesli (original is butter, sugar, fluor and hazelnut). besides, this one use different techniques for crumbling. it was a bit challenging at the beginning, i thought it would be a failure but then, it is much better than the usual crumble recipes which using cold butter.

one thing that i will also change from the recipe next time i bake  is, the sponge cake recipe is more than what i need. i will minimize quarter the quantity of d sponge cake and double the quantity of crumble. i believe it will be super yummm that i could not stop from eating it. 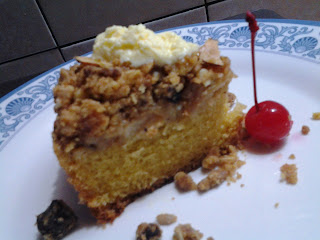 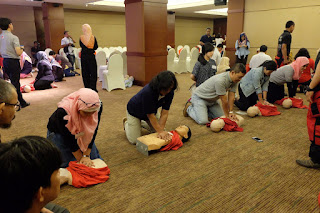